SRĪ DEVPURĪJĪ is an embodiment of Lord Shiva. Shiva is the liberator, the destroyer of evil and wickedness. He embodies the light of consciousness and the fire of purification. Humans are indebted to Lord Shiva for the science of Yoga; he revealed this knowledge to the Divine Mother, Parvati, and in this way presented it as a gift to the entire world.

A Bhakta who meditates on Lord Shiva attains liberation via a shorter path, as Shiva is the kindest and most merciful of the Divine Trinity - but those who wish for his gifts yet are unwilling to make an effort he can also frighten with his anger.

Srī Devpurījī held many wonderful Satsangs in his Ashram in Kailash (Rajasthan) – not just for humans, but also for animals. Snakes, scorpions, dogs, and birds always surrounded him. He could speak with them because he spoke and understood the universal language, and the animals would listen attentively to his words.

Many miracles have been reported and I would like to tell a few of them here. A Pandit from Kailash, who visited the Ashram with his father as a fourteen-year-old boy, was witness to a truly astonishing miracle:

“Srī Devpurījī had received a wound to the lower part of his right leg. Its condition steadily worsened until finally, it began to suppurate. The whole leg was badly inflamed and swollen and my father urged Srī Devpurījī to allow a doctor to give treatment.

Srī Devpurījī, however, was unaffected by the state of his leg and only replied: “If it disturbs you so much I will cut it away”. Immediately he took hold of his sword, put it to the wound and with one deep cut removed the flesh from the entire calf muscle so that the bare bone lay exposed. Then he removed his turban and bandaged the open wound and, smiling, asked my father: “Is this better for you?”

My father and I had watched his actions speechless. Shortly afterwards, we said goodbye, still speechless with astonishment and shock. Next day we again visited Srī Devpurījī to inquire how he was and he showed us a perfectly healed leg. Not the slightest sign of any injury or scar could be seen!”

A hunter told the following story:

“One day I was on my way home with my booty in a basket – a dozen dead birds - when I saw Srī Devpurījī approaching in the distance. Quickly I hid the basket because I was afraid of Srī Devpurījī’s anger. As Srī Devpurījī reached me he immediately asked: “What have you just hidden in the bushes?”
“Nothing, Lord.”
“Nothing?”
“Only something for my children,” I finally stammered.
“You only think of YOUR children, but unfortunately not the children of these birds,” the Master said severely. “Before God nothing is hidden. Give me the basket now.”

As I handed the basket to him he opened it and – miraculously – all the birds that had been shot flew away to a new life. Since this experience, I have renounced the killing of animals forever.”

Other events also testify impressively to the Divine power of Srī Devpurījī:

“The family Mina was celebrating the wedding of the daughter of Vinja Rām in Kailash. In the middle of the festivities, to the dismay of all, a young girl by the name of Khetī Bai fell ill suddenly and died almost immediately. However, the family was indeed fortunate that Srī Devpurījī was staying in the village at this time, and believing in his Divine power they hoped for his merciful assistance. They carried the young girl to him, laid her at his feet and asked for his grace.

Srī Devpurījī looked at the young girl and said: “She is not dead. She will grow up to be a healthy, loving and devout woman and mother. Now my daughter, awaken from your meditation!” Then Khetī Bai opened her eyes and smiled at her benefactor.

She is still alive today and lives with her husband, Lala Rām Mina in the village of Srī Madhopur in Sikar District (Rajasthan).”

The noble Rajput family of Srī Balu Singhjī from the nearby locality of Jalunda were also witnessing to a similar miracle:

“Srī Balu Singhjī’s son died one night and the grieving family carried the child’s body to Srī Devpurījī’s Ashram in order to plead for his grace. It was already after midnight when they reached the Ashram and Srī Devpurījī called to them angrily: “This is no cemetery – go away! You are miserable and selfish and come only when you have problems!”

But all knew that Srī Devpurījī’s harsh words were only a test for them, and waited patiently until his mood was gentler. Their faith was rewarded, for shortly afterwards Srī Devpurījī came out of the Ashram and instructed them to bring wood from three different villages and light a fire. When they had done this, he took the blanket that was covering the boy and tore it in half. One half he lay over the child again, and the other half he gave to the mother, saying: “Take this cloth and tie it to the branch of that tree over there.”

She took it and tied the knot with trembling hands – and as the knot tightened the child opened his eyes and began to breathe.”

For a long time, there were no pictures or photos of Srī Devpurījī. When asked for a picture he would say: “My image is the sun. Whenever you wish to see me look at the sun.” But he did allow one artist to paint his portrait, and so at least there is one portrayal of his physical form preserved for us.

Unfortunately, there are no transcripts of Srī Devpurījī’s talks, but I can pass on a few of his words:

One day Srī Devpurījī revealed to his disciples that he would leave his physical body on the next day and reunite with the Cosmic Light. The people did not want to believe this as they saw him in front of them healthy and strong. But next day his words were fulfilled – Srī Devpurījī left his body during meditation. Later a prayer hall was erected on this holy site.

Srī Devpurījī and Srī Mahāprabhujī transmitted the science of “Yoga in Daily Life” to us, and all Yoga aspirants are under the protection of Srī Devpurījī. He is always there whenever we think upon him and show our adoration and love. 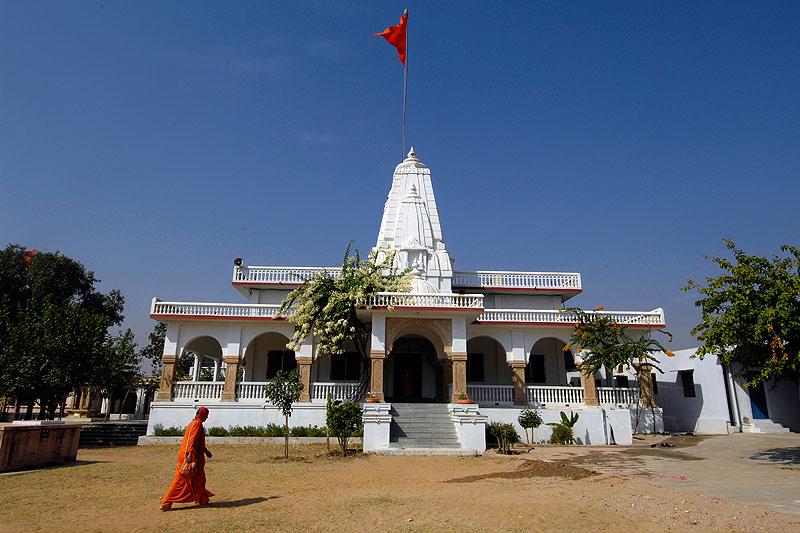